Ghosts Of Christmas Past

Christmas is hard for a lot of people, but for Calla Douglas it’s become unbearable. She thought to end her life but when the wind blows her off a tall building, she isn’t sorry to be rescued in mid-air by a flying man. Unfortunately finding out he has fangs dampens her relief.

When Nightwalker Daniel Wilde rescued Calla, all he intended was for her to be the temporary companion he takes before Christmas Eve, to keep at bay the loneliness he feels each year. Trouble is, she’s got a way of making him think more permanently than he’s comfortable with.

Both Calla and Daniel have “ghosts” of past Christmases, bad memories that haunt them, but through love, companionship—and a lot of mind-blowing sex—this holiday may become the last one those ghosts will ever visit.

This was originally an Ellora's Cave title authored by Cricket Starr. It is now offered as a Janet Miller book.

Calla tried not to imagine what it would feel like to land on the concrete from this high. She expected it would hurt when her body shattered on impact, but perhaps the fall wouldn’t be so bad. Possibly it would feel like flying and she'd always wanted to fly.

Even so, she hesitated. Maybe this wasn’t such a good idea…

A sudden gust of wind hit her, and then she was teetering on the edge...

And then there was no longer any decision to make. She wasn’t on the roof but falling, the glass side of the building a blur of light and dark bands as it swept past.

Terror grabbed her as the ground grew closer and Calla opened her mouth to scream.

But before she could, warm arms wrapped themselves around her and then her downward progress slowed until she was merely floating next to the building.

Floating in midair, in the arms of someone large and solid. Calla turned her head and saw his face—handsome, pale, with dark hair and compelling black eyes.

Those eyes compelled her now. Sleep…came an insidious whisper into her mind.

But she fought that. "Who are you?" She looked down at the expanse of space below their feet. They hovered at just about the fifth floor and now began to rise slowly. "You an angel, or some kind of Superman?" No wings were on his back, nor did he have a cape.

He smiled with large, evenly-spaced teeth that gleamed in the moonlight. "Not even close,” he told her in a dark sensuous growl, and a third kind of shiver hit her, that of long-unexpressed sexual need. When was the last time she’d had that reaction to a man?

“But we’ve a ways to go and you should sleep." Again there was that compulsion in her mind, stronger than before, and this time he gave her no choice. Calla's mind went dark and she knew nothing more.

She came back to consciousness surrounded by warmth and water and…bubbles?

Calla opened her eyes to see and smell the unmistakable sensations of a bubble bath in a very large tub with a man sitting in the water behind her. His hands massaged her scalp, working shampoo into her hair.

She knew it was a man because of the large erection poking her backside.

Calla tried to pull away, but his arm went around her waist, clutching her close. “Hold still. You’ll get soap in your eyes.”

Soap in her eyes. Was he kidding?

No, I’m not. You needed a bath so I decided to give you one. She heard him sniff her scalp. You smell much better now. Hold your breath!

With a quick jerk he pushed her under the water and then let her sit up, wet hair streaming into her eyes.

With extreme annoyance, Calla shoved the hair off her face, twisted in his arms and glared at him. Of course she hadn’t had a bath…the flophouse she’d called home these past few months didn’t boast a working shower. Half the time the toilet hadn’t been operational, but it was all she could afford on her Burger Barn salary.

So she’d smelled a little—that didn’t give him permission to strip her and take her into his bathtub. She liked to pick whom she got naked with.

Even so, his intrusion into her mind bothered her more. “What are you doing inside my head?”

He grinned at her and again she was struck by how perfect his teeth were. “Not to worry. You are a psi with strong mental powers. My being able to touch your mind is not only normal, but under the circumstances quite useful.”

In spite of how gorgeous he was, Calla’s uneasiness grew. “What do you mean ‘circumstances’?”

“The ones we are in. What I am…why you are here.” He stared at her long and hard then gave a heartfelt sigh. “I guess we might as well get this over with.”

He put two fingers into his mouth and with a jerk dislodged the teeth she’d been admiring, pulling and revealing an artificial upper plate. The teeth underneath—the real teeth—weren’t at all even, but shorter than normal except for the incisors on either side, which were long and pointed.

He had fangs like a vampire and as she looked, his dark eyes briefly glowed red.

Oh my God…fangs, glowing eyes, and he could fly—he was a vampire!

Fallen Angels – 5 Angels - There was emotion as well as steam in Ghosts of Christmas Past and even though it was only fifty-four pages long, this was a great read. - Serena

Romance Junkies – Blue Ribbon Rating 5 - The story offers a great lesson in going face to face with those ghosts and laying them to rest. The dialogue flows, the humor is just right and you find yourself cheering them on… This is a definitely must read and a keeper. - Nickie Langdon

Ecataromance – 4.5 Stars - GHOSTS OF CHRISTMAS PAST proves love has the redemptive power to help someone heal after a tragic past. – Amelia 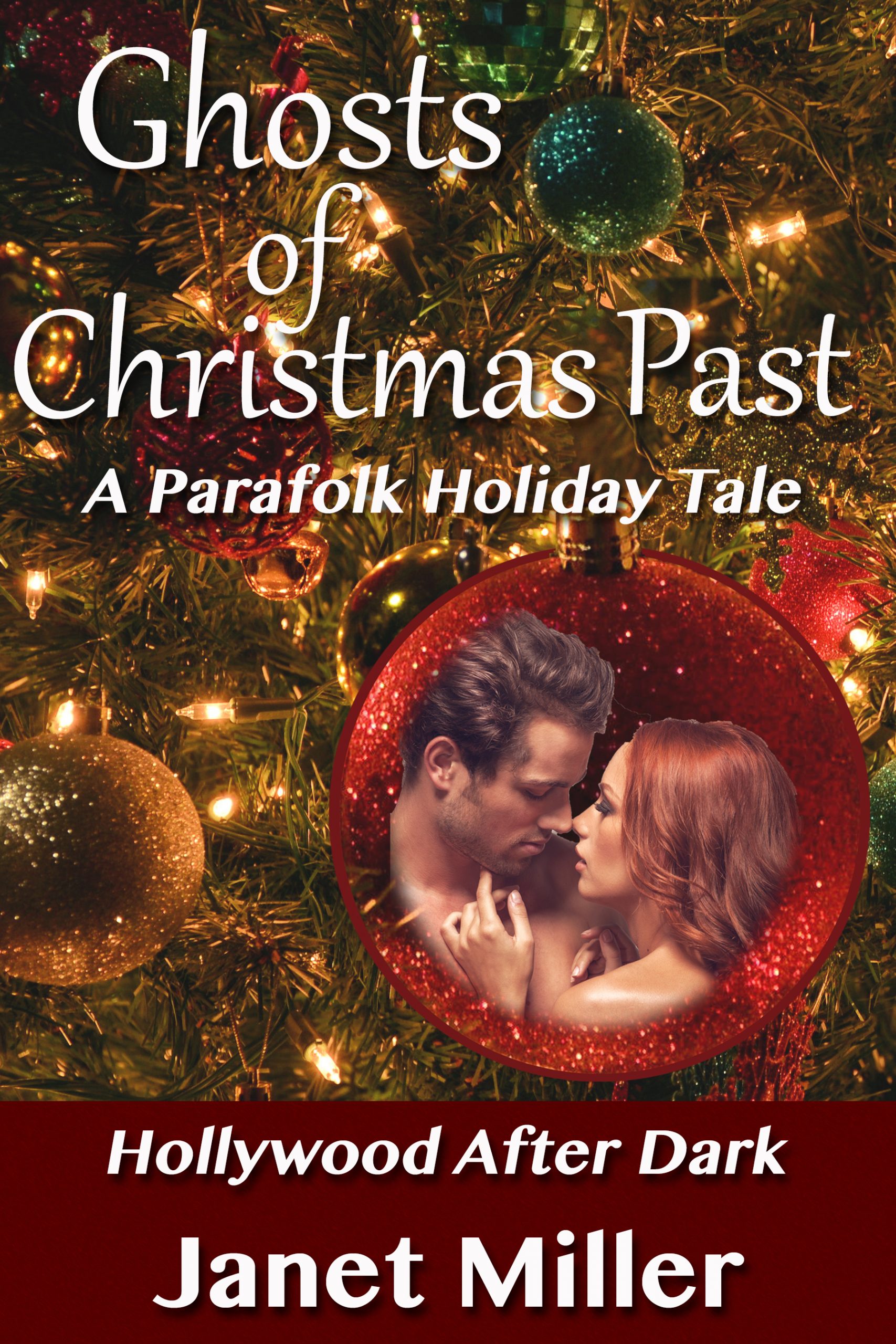